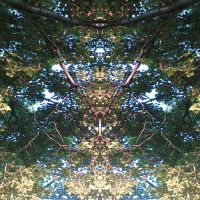 Proc-Records founder and curator Adam Crammond, a k a, Graffiti Mechanism, picked or conceptualized, whichever the case, a rather curious cover for his latest effort Fueled by Emotion. Archetypal digital illustrations and graphic images come to mind when the subject of electronica album art is brought up, so it only rightly elicits a slight shrug that this release features a low-definition, worm’s-eye view photo (with mirror effect) of a tree ostensibly taken during a drought.

But looks, as the discerning would know, can be deceiving: the seven solid tracks of the album, which was released by Happy Puppy Records, intuitively belie whatever pallidness the cover may come off as having.

The tracks, decidely devoid of any drum-emulating element but firmly anchored on the cohesiveness and repetition of their melodies for rhythm and direction, are hymns of everything across respite, meditation, beguiling playfulness and melancholy. To achieve these effects, the album makes much use of drones; sustained, overlapping notes; menacing ambient sounds in the form of screechings in the backround; and, of course, the minor scale.

Dolowi, the fourth track, is especially interesting partly for its short duration and partly for its flirtatious duplicity, leaving only a brief run of a few chords (or are they just single notes?) panning consistently from channel to channel to inspire hopeful contemplation when listened to at dusk and incite rueful thought when played at dawn.

Extending it beyond the realm of music, this work by Graffiti Mechanism can make for a fitting soundtrack to a dark and brooding art house film, perhaps one that does not feature much talking, or even acting. Evoking deep emotions? This album can do the job.