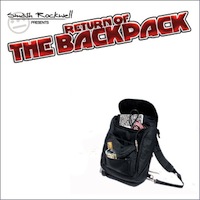 Casual: The Return of the Backpack

The Return of the Backpack is as exciting as the return of the king of the elite rap lyricism. Casual and the Seattle-based, indie rap beat maker Jake One made thirteen tracks that make up, a smooth, solid album.

“Backpack” represents rappers who do not appear charming to a big audience. Casual though, wears his backpack proudly because he is rhythmically convincing and his character reverberates on every track he makes.

Clocking in at number 1 is a hard-hitting track called Father Figure, in which he talks about how hieroglyphics conquered the waves for underground rappers toward a flourishing music era.

Casual shows his adaptability on Head Jerk (Gimme Boss), which also displays Jake One’s skill to perform diverse styles of production. While They Must Know includes a mystifying background beats that works well with forceful beats and foot-tapping rap tempo.

Rock With Us exhibits horn-driven beats. With flawless lines and steady beats, this track demands the audience’s attention. In Just Like Oakland, Casual treats us with a piece of his memories from his hometown. Press play and let this talented sonic poet paint a vivid image of this city in the west coast.

A personal favorite, Times Done Changed wraps up the album with hooking, clean delivery and jazzy horns that add a funky flair.

The Return of the Backpack is a strong EP resounding to the underground hip-hop industry. Casual and Jake brims with complexity and depth to create an album that doesn’t just sound good, but also triggers the mind.