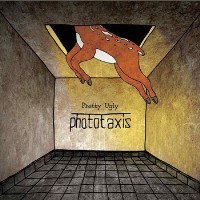 Phototaxis is a special band that’s made primarily of Yael Feldinger (lead vocalist and singer), as well as Itay Tsuk (composer, arranger and pianist). They’re joined together by the talented crew of Nir Blum, Roy Cheled, Yael Geva and Neta Cohen Shani.

The band is only a couple of years old, but they seem poised for success; having their debut record come out to critical praise in their home country of Israel.

Fusing a lush set of tracks that echo jazz, blues and a trip hop atmosphere; Pretty Ugly is a strong record that aims to please its listeners and does it successfully.

Phototaxis sounds like the lovechild of Macy Gray and the Sneaker Pimps. Their sultry blues jazz and trip hop combination is endearing. You’ll find yourself gently swaying to the grooves of the tracks and being mesmerized by the sound.

Released last 2010, the album is a couple of years old. Starting with the title single, Pretty Ugly, listeners are greeted to great vocal work and a slightly-drunkin’-jazz-bar mood throughout the cut. It’s probably one of the best tracks representing the group and album in total.

Alone, is another enticing single that bears a slightly stalkerish-feel. With a steady beat and hypnotic vocal work, it’s quite catchy. Meanwhile, Isn’t It Funny is a more serious jazz ballad that deserves a slot in a James Bond film; while ending track, Leftovers, creates a mesh of synths, samples marked by a melodic hazy veil.

Pretty Ugly is nowhere near being ugly. In fact, its’s an awesome record especially for people who adore the whole trip hop/jazz blend. Featuring great composition and recording, it is a real gem in a sea of overabundant mediocrity. Take a listen and see if you like it too.