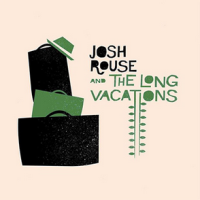 Tried and tested by time, Josh Rouse treats us with a special edition of his album titled Josh Rouse and The Long Vacations. The album, which is a collaboration with his peers Cayo Bellveser and Xema Fuertes, is packed with eleven tracks that takes you back to laid-back landscapes and simple pleasures of Mediterranean life.

Honed by his 15 years of in-depth experience in music, expect nothing less from this alternative folk artist from Valencia, Spain. Rouse has already carved his mark in the industry with highlights such as touring with the likes of David Gray and John Mayer. His songs, which were mostly featured in the films of Cameron Crowe, Sidney Pollack, and Ryan Murphy, have captured a wide range of audience regardless of age.

First stop is Diggin’ In The Sand, a confluence of light folk arrangement and singalong style that successfully swoops the listeners to a happy, sunny disposition as each note unravels. It’s an impressive yet humble folk piece that charms its way with heaps of good vibes.

Moving On takes things a little slower, caressing the ears with fluid vocals that sings in an effortless and carefree manner. The track embraces honest, self-reflective verses that talks about life without any frills.

Featured in NBC’s hit show “Parenthood,” Oh, Look What The Sun Did! mesmerizes us with waves of quirky yet insanely saccharine keys. Go on a short drive, roll down your window, and just let the breeze flow through your hair while this delicate and honest song plays on the background.

The album is concluded with demos from Simple Pleasures and In The Neighborhood, which are included in his other album, The Happiness Waltz. Both the tracks still captures the laid back spirit of the other pieces, executed with class and grace.

Listening to each song, there’s an aura of delicateness that envelopes the whole collection. Each song in the album is a true testament of Josh Rouse‘s talent and skills, making this album a great find for all music lovers.