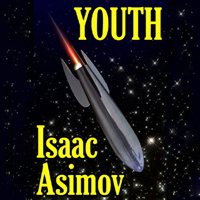 In need of a good read? Isaac Asimov‘s Youth is definitely something you’ll finish from cover to cover.

Isaac Asimov is considered as one of the most prolific writers of his time. A Russian-born American author and professor of biochemistry, he had written or edited more than 500 books and approximately 90,000 letters and postcards. He was best known for his science fiction works and his popular science books.

Published in the May 1952 issue of Space Science Fiction and reprinted in the 1955 collection The Martian Way and Other Stories, Youth is one of Asimov’s rare stories with characters of distant life forms.

The book tells a story of Red and Slim when they found two strange animals the morning after they heard thunder sounds. And it was not long before both of them understood that they could never show their new and exotic pets to their parents.

With Asimov’s writing style, the story is light and easy to read. He used parallelism to exhibit the similarities and differences between human beings and the creatures. One thing I personally liked is how it is concealed in surprise until the end—something that Asimov did well in many of his stories.

This literary piece is filled with adventures and brilliant ideas that somehow questions the nature of living and self-imposed extinction. Whether you’re a kid or an adult, you’ll definitely be entertained.

So download, read and enjoy this classical sci-fi gem.