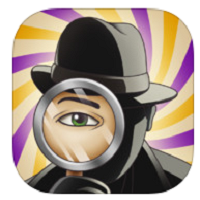 Another Case Solved from Chillingo gives the whodunit puzzle genre a different look, as you’re playing a detective tasked to solve some very unusual cases. It’s a humorous game with plenty of puzzles, some that can actually get very challenging in the latter stages.

You start as a new detective working on a variety of cases while uncovering the candy ban story. The early cases involve retrieving missing items and such, but the more cases you solve the higher your pay will be, and the more interesting the cases become.

Another Case Solve will require you to match icons via swiping, and you can match tile rows in any manner as long as they contiguous. Doing this will produce more clues that will help you. To solve these cases you’ll need to collect a specific number of clues, and the mini guide will help you keep track of the number of clues you have.

You only have a limited number of moves to gather these clues, but help tools are available in case you get stuck. As you play the game, you’ll be able to unlock more tools to help you out.

As you go through Another Case Solved you’ll get involved in major cases, some of which involve mini games. The puzzles become more challenging, but it doesn’t get to the point you’ll pull your hair out. Overall, this is a nice puzzle game that should satisfy fans of the genre.