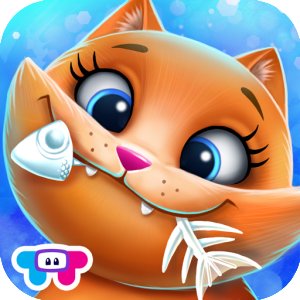 Kitty City – Cat Food Ninja from TabTale takes a page out of the popular cutting and slicing games and adds a bit of twist to it. Your goal is to rescue all the kittens, and the more you slice and dice the more of these kitties you’ll be able to save. If you can collect all the kittens you win the game and while it sounds easy enough, it’s simply addictive.

The premise in Kitty City is simple enough and so is the gameplay: just like other slicing and cutting titles you need to focus on tapping and swiping to cut as many kitty foods as possible. The early levels are easy enough but it gets progressively harder as you go on.

What makes Kitty City particularly challenging is the fact that you have just three chances to rescue the kitties, but there are power ups scattered throughout the four neighborhoods so you can get a boost when necessary. Each of the neighborhoods has a distinct appearance, and the kittens you need to collect there varies, so it doesn’t feel like you’re doing the same thing over and over.

The cutting and slicing genre usually doesn’t offer much variety, but TabTales’ Kitty City does, and overall it’s a very well-designed game. The graphics are sharp and crisp, and the mechanics are simple enough for anyone to pick up. If you love these kinds of games then this is a worthwhile download. There are IAPs here but if you don’t want to shell out money there’s no need to as you can still enjoy the game.