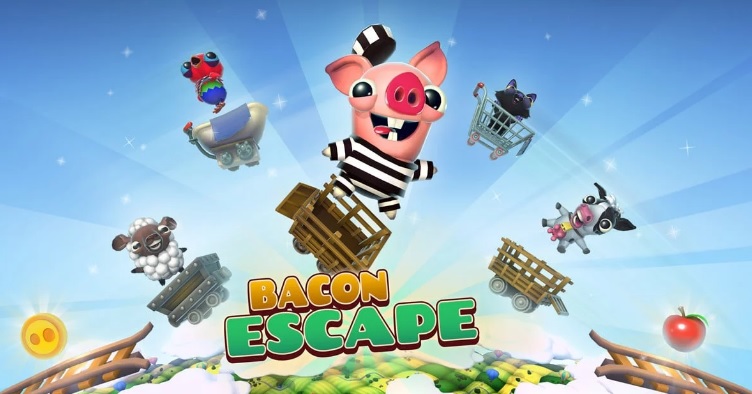 A pig has broken of prison, and it’s up to you to help him escape. With Bacon Escape from Illusion Labs, your reflexes will be challenged as you try and dodge the obstacles in your way. It’s a modern platformer, but the easy to use controls and beautiful graphics will keep you playing and coming back for more.

Each level has a Happy Place, which you have to reach to move to the next stage. Your pig’s cart moves automatically, so your role is to prepare the track ahead for a safe passage. You just have to hold or tap the screen depending on the obstacle ahead.

When faced with blue colored obstacles, tap to make them rotate. For example, you tap the blue colored hammer to lower, or tap the bridge to close so the pig’s cart can cross. With red obstacles, tap and hold the screen: if there’s a fire, tap and hold the screen until your cart has passed by. Once you lift your finger, the fire starts burning again.

Red colored platforms also move down or up depending on where you tap and how long. For instance, you have to time the tap and release so those blocks don’t fall on the cart.

Basically you can tap anything on the screen and change it so your pig’s cart can cross safely, It sounds simple enough, but it becomes more challenging with the other levels. However, the levels don’t change so you can study them and try to advance in the game.