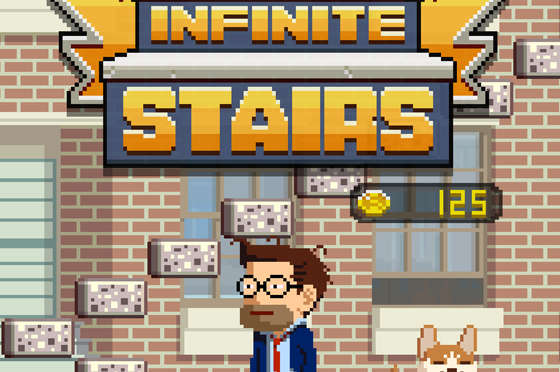 If you have spent any time playing mobile games, you will notice the most addictive are often the simplest. Infinite Stairs from NFly Studio is a classic case, as the game has a very basic concept: climb stairs. It doesn’t sound like much, but it was a big hit in South Korea and now it’s gaining popularity around the world.

There are two buttons on the screen, for turning and climbing. Tap the Climb button to move up the stairs, and tap the Turn button to continue. If you make a mistake and fall off, the game’s over. You can think of this as an endless climber, with the only objective being to climb as high without falling off.

It sounds simple but as is the case with most casual games, it’s more difficult than it sounds. The secret is knowing when to tap the climb and turn buttons so you don’t slip.

The higher you climb, the more characters you are able to unlock and play. The cheerleader is the first character, but there are others including a vampire, cowboy, tennis player, and more. It doesn’t matter which character you play, as the controls are always the same. There’s some level of customization for reach character, but its really about mastering balance.

Infinite Stairs is the kind of game that you’ll want to keep playing over and over. From the pixelate graphics to the maddeningly difficult process of climbing stairs, it will keep you hooked.