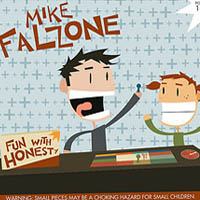 Mike Falzone is a witty and fun Indie Rock singer/songwriter who seems to never part with his acoustic guitar. He has played with artists like Ryan Cabrera, Citizen Cope, Teddy Geiger, Stroke 9, Matt Nathenson, Mates of State, Piebald, The Alternate Routes, The Smyrk, Mike Davis, Suckka Brown and many others.

In 2007, he went on a national tour and opened for artists like Third Eye Blind and State Radio. He has played over 110 shows in just one year (wow!!!), including A National Tour and a Borders Books sponsored tour. In 2008 Mike opened for Kate Vogele (one Tree Hill star), Ryan Cabrera, was invited to Asbury park to play the 3rd annual WAVE GATHERING and released ‘Fun with Honesty’ in Borders Stores and on iTunes.

Since its release the album was very well reviewed. “Great writing and funky style. I love it!” said Derek Sivers, the founder of CD Baby and Beyond Race Magazine wrote: “On Falzone’s release, Fun With Honesty, he uses his witty lyrics and a soulful voice to become something a little funkier than the average singer/songwriter.”
Mike has recently put this entire album under the Creative Commons license for everybody to freely download and share.

When asked to describe his music, Mike Falzone says:

Indie Pop, with a minty aftertaste…kind of like eating a sexy Peppermint Pattie. I figure, if someone told me they just heard new music that sounds like a sexy, mint confection…I’d want to hear what they were talking about.
Am I right, or am I right???

My philosophy is, you gotta keep it fun. Of course I want my songs to get people thinking, and maybe even give them something to talk about, but if at the end of the day I can get someone to laugh about the unappreciated work of The Joker (cue track #6) then I’m happy. I think of my music as a body of work; my presentation of it is the skin, my melodies make up the blood that flows through and helps it’s muscles work and such, and my lyrics are the bones that keep it standing.. My job is to form all this together into a tight little package that construction workers might whistle at…hopefully you’ll feel compelled to holler too. Don’t worry, I’m not easily offended and I’ll take what I can get, so whistle away.

Screenshot of the free album promotion on FrostWire