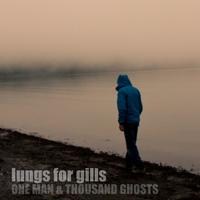 Listening to Lungs for Gills feels like you are walking on a frost filled morning with nothing but the beautiful sound of nature and silence to accompany you. That may sound weird, but this four piece group certainly knows how to create an ethereal mood. The band hails from Quebec City and was formed during the winter of 2010.

Maybe it was the cold weather, but these guys definitely got something to be proud of. One Man & Thousand Ghosts feature songs that contain sweet lyrics, emotional vocals and lovely melodies. There are some that border on the rock edge but still has a sweet touch to it.

Of course, the recording isn’t as crisp as you’d expect from pros, but nevertheless it has a delicate rawness that makes the band even more endearing.

The group was initially made up of Simon Belanger, Pierre-Luc Lessard and David Pouliot-Roy. They were later joined by their current bassist, Guillaume Campbell after the EP was recorded.

The band is described as having a space rock sound with mellow, understated vocals, melancholic moods and sometimes sweeping rhythms. This is quite apparent in their opening track, Boundary. The song is a quiet track that varies in tempo. It alternates between slow to sweeping within the song. Vocal work is very expressive and heartfelt; adding a touch of emotion to the cut.

On the other hand, veering away from their somber tracks, Starry Void is a more upbeat and rock infused single. Although personally, I think the guys best hover on the quiet side; this one isn’t so bad. It’s then followed by Collect The Stars where the band showcase their best form. This one reminds me of a Coldplay song and even the vocalists’ chops closely resembles the X&Y singer

Lungs for Gills definitely has something up their sleeve. In their Jamendo page, they are described as “the union of four passionate musicians and the collective desir (sic) of sharing something which they are very proud of.” Indeed, their passion shows.