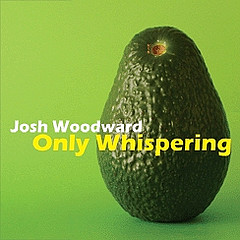 This is an oldie-but-goody release from Josh Woodward. Praised for his melodic voice & witty lyrics Josh definitely delivers on this one. “Only Whispering” is probably the most acoustic of all seven of his albums and as he himself admits, the one most focused on storytelling. My favorite songs include “I’ll Be Right Behind You, Josephine” for sweet lyrics & “East Side Bar” for its swing-like happy feeling. If you need a nice relaxing album to listen to on a quiet day – here is a perfect one for you.


Want to know more about Josh?

He was an early pioneer of Creative Commons-licensed music and name-your-own-price CD sales. Woodward’s catalog of over 150 songs, including unreleased demos, are available as free downloads from his website, as well as 7 CDs released by Snooter Records. Woodward has had over one million downloads since implementing his sharing policy.

In contrast to so many commercial musicians, Josh actually wants you to share his music with your friends. He wants you to download his albums, burn many many CDs and give them out to your friends… Spread the word! It might be nicer if you actually buy them (it helps the artist a LOT), but if you can’t afford it or just don’t want to pay for the music, that’s OK too.

Many of Woodward’s early songs were written in response to challenges from Song Fight!. His songs have won more than half of the titles he competed in, giving him one of the highest winning percentages on that website. A recurring central theme in his lyrics is life in his hometown of Findlay, Ohio. His musical style has been compared to that of Simon and Garfunkel, Barenaked Ladies and John Mayer.