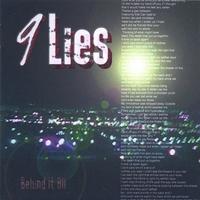 Calling out all rockers! Relive the era of 90’s rock by listening to this modern day Indie Rock band called 9Lies – a great band with an interesting name. Their album, “Behind It All,” was made available for digital download on July 23, 2007 and is licensed under Creative Commons. The album contains 3 demo songs that will surely make listeners rock like they never did before.

9Lies is a band composed of 5 talented beings, Steve Mann (vocals), Dave Kernohan (guitars), Nick Black (guitars), Chris Cardwell (bass), and Stephen McAuley (drums). The combination of strong 90’s beat and modern rock guitar riffs made this band stand out among the others. The familiarity of their sound is going to be their key to reach out to the old and new generation of rock lovers.

“Behind It All” is also the carrier single of this album. The sound of classic rock with great guitar riffs. Just like typical rock songs in our modern time, “Behind It All” album has very expressive lyrics. One thing that made this piece of art stands out among other rock albums? It’s definitely their upbeat tempo and melodic rock sound – a perfect background for anything and everything. That’s why, I’m pretty sure young and old rock fans will love this. This album also includes “Slippin Away” and “Bilnd.”

As of today, 9Lies made a lot of appearances around Europe and the continental US. You may never know, you might have listened to their songs, but just don’t know who these amazing musicians are. Thanks to their efforts of making “Behind It All” available for download, music lovers will be able to listen to them for free.

This work is licensed under a Creative Commons Attribution-Share Alike 3.0 Unported License and is available for free download from Jamendo.com