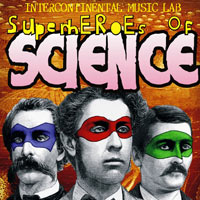 “Superheroes Of Science” from the Intercontinental Music Lab

“Superheroes of Science” is a crazy compilation of alternative pop tracks and the first one in the Superheroes trilogy. Each song is different and unique in its own way. You will hear spoken language, beautiful female voices, some trip hop, and even touch of America! You will not be bored for sure! According to the musicians, the album explores the passions and discoveries of scientists from earth’s illustrious past. The album was put together collaboratively between musicians from Japan, Australia, England and America.