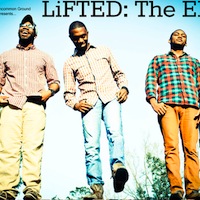 Their voices are very soothing, which makes this album very hard to ignore.

You will be immediately drawn into the melody and up-tempo rhythm of Just The Way You Are. The synchronizations are fascinating, moving, and the lack of auto-tune is refreshing.

Tell You, featuring Wikes & Cello Figaro is more pop sounding. The chime-like synths add a carefree feel to the whole track. The verse is also cunningly written and the accords toward the end are very suggestive of ’90s r&b.

Take It Slow relapses the EP back to that organic, MTV Unplugged feel.

Do It All featuring India Tyree is a touching song. Both artists’ vocals are suitable on the mellow composition. It also shows prodigious coherences that have become an overpowering theme in the album.

With the trio’s astounding creativity and talent, this album indeed shows that the sky is the limit for them.

Track List:
1. Just The Way You Are
2. Tell you feat. Wilkes & Cello Figaro
3. Take It Slow
4. Call me feat. Cartwright
5. Do It All Feat. India Tyree
6. Change of Season
7. There Are Times Feat. Rivers Taylor
8. Haircut