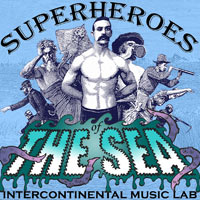 “Superheroes Of Sea” from the Intercontinental Music Lab

“Superheroes of Sea” is a melodic, sometimes dark sometimes upbeat alternative pop album and the second one in the Superheroes trilogy. Recorded by musicians from America, Australia, Japan and the United Kingdom, the album celebrates the denizens and heroes of the sea, both above and below.