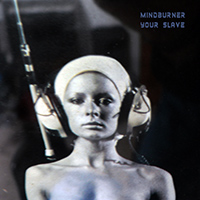 Mindburner, AKA Alan Watkins, was born in Belfast in 1968 and he has been producing electronic music for the past 15 years. He owns several vintage synthesizers and enjoys playing them very much. He involves various styles in his music, and incorporates influences from early 1980s electronic pioneers such as John Foxx, Gary Numan, and others. His music generally ends up being about the darker side of life: the half shadow, the unanswered question, or the hidden fear. These emotions drive him to write and produce.

“Your Slave” is Mindburner’s latest album, and this free download contains seven new tracks. Despite his music being about “the darker side of life,” “Your Slave” is not a dreary, plodding exercise in introspection. Instead, it’s a catchy electronic album with just a hint of the darkness. You can feel a bit of it in the music, but unless you listen closely to the lyrics, you won’t notice just how dark the themes of the album are.

The opening song in this album is the title track, “Your Slave,” and it perfectly encapsulates the feel of the album. The catchy beat is very 1980s electronica (think Depeche Mode), and Watkins’ vocals perfectly complement the sound. The song also contains some of the darker themes and emotions present in Mindburner’s music; when you listen to the lyrics, you’ll learn that he’s talking about being a slave to love, and what it makes you do (“join a cult, start a war, run away”).

The rest of the album continues the pattern of mixing ’80s-influence electronica with dark themes and lyrics. For example, in the second track, “Sodem,” a robotic voice talks about wanting to walk to the park but being too scared; the voice then lists down reasons not to go, and ends with “that’s not the half of it.” Meanwhile, “TV Noise” starts off with a voice clip of someone pretty much calling everyone “vile. depraved sinners”; later in the song, Watkins sings that “when a child is born, he has blood on his hands.”

Mindburner’s “Your Slave” is a definite must-download. Don’t let the dark themes scare you away; each track on this album is a catchy and entertaining song you can listen and groove to. It is pumping with 1980s electronica, as epitomized by the laser effects in the song “Change” (incidentally, one of my favorite tracks on the album). At its most basic level, Mindburner has created a listener-friendly record that one can enjoy. Do take time to give it a closer listen, though; the lyrics add a whole other depth and dimension to the album.