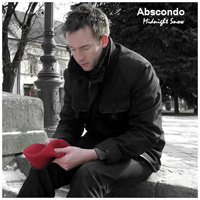 If you’re wondering about what Abscondo got his record name, a quick look at his personal weblog will provide the person. Abscondo came from the verb abscond–to run away, usually taking something or someone along. This is the perfect way to describe his music in his free album, Midnight Snow. This album is arranged in such a way that 5 songs, which fill up Side A, represent Midnight Snow. On the other hand, the next five tracks, composing Side B, make up the Morning Rain.

Abscondo was originally based in Seattle, but left the place and set off to live in Eastern Europe, particularly in Slovakia. Here, he was able to release two acoustic albums, one of which is Midnight Snow. Abscondo is also a member of an acoustic duo, Sungod Rock Abscondo. The duo has released its first album in 2007 and followed up with an album in April 2009.

As a solo artist, Abscondo decided to make all of his songs for free. He himself states, ” didn’t look for any help from a record company because I didn’t want it and didn’t need it. I wanted to create something truly non-commercial and unfiltered. I have decided that I didn’t want money to come between my creation and your ability to enjoy it.”

Did you hear that? This is one of those singers who just creates music for the enjoyment of listeners. And did he fulfill his purpose he set his music for? Let’s just say I can only nod in agreement. Abscondo’s songs in this album have some of the heaviest lyrics I’ve heard. This album is a solid collection of ballads that are deeply rendered by Abscondo with his soothing voice. The division of songs to Midnight Songs and Morning Rain is also clearly drawn. While the tracks in the Midnight Songs are more personal, Morning Rain shows just how Abscondo can pull off songs that talk about people from different walks of life.

Here is the track listing for Midnight Snow: