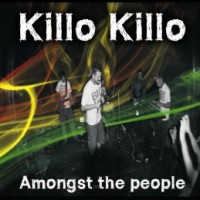 I must admit, ever since I got a chance to live on an island where reggae was considered mainstream music, I have been on the lookout for good reggae bands. Luckily, I found KILLO KILLO banda. Although he is easily comparable to mainstream reggae guru, Matisyahu, KILLO KILLO banda makes sure to create his own mark.

VOJISLAV Malešev sings under the nick KILLO KILLO and sings “roots-reggae or ragga riddims” using his poetry. Amongst the People is an engaging compilation of 11 tracks that not only showcases fresh ragga music, but also gives a nod to the roots of reggae.

While staying true to the reggae flair, some of the tracks showcase an apparent influence from world music. MC KILLO KILLO admits to listening to music from India, Middle East, the Balkans, North Africa, and Amazonia; believing that listening to such diverse types of music enables one to find the happiness in his soul and spirit.

As you listen to the album, you’ll see the range of vocal style MC Killo Killo has up on his sleeve. Some might cry foul in his very familiar style, but he is capable of blasting out clear reggae rap vocals like in My Bike and at the same time bring it down to a more melodic, soulful number like the one you’ll hear in Kralj.

It’s essentially soulful reggae music that you can imagine listening to in some unknown beach across the globe. It’s a good enough listen for me, how about you?