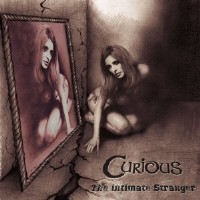 German alternative goth band promises a good haunting. For many people, The Cure was the “be all and end all” of the Gothic rock scene. Curious, however, aims to make their own mark in the genre.

Almost by foresight, Curious initially traversed their musical dreams by becoming a cover band of The Cure. Although they subsequently created their own music, it doesn’t take a genius to see where their influence came from.

The Intimate Stranger includes 10 tracks that powerfully channels The Cure during their Disintegration days.

Starting out their musical foray in the summer of 1999, Curious, made up of Olli (vocals), Suzie (drums) and Moci (bass guitar) covered their indie favorites like OMD, The Chameleons and The Cure. By 2000, they opened for Gothic rock legends The Mission and soon after, the band promptly put a stop to their cover days.

The band focused on creating and writing original tracks which resulted to their first EP, Falling. Pretty soon, a full album was recorded; The Intimate Stranger came as a result.

Despite its obvious influences, the tracks on this album still presents itself pretty much apart from the rest. Thought of Angels not only opens up the album nicely, but it also gives the listener a peek at what to expect from the rest of the songs. They also mix it up with tracks like The Silent Voice which eases down on the tempo and goes for a more a ballad-like quality.

Despite the apparent similarities in sound to their heroes The Cure, Curious manages to stand up for itself and establish their own music. Although it would be nice to see them branch out a bit and maybe strike a more original chord, the album is worth checking out especially if you have a fancy for Goth rock and The Cure; because essentially, that’s what you’ll get.