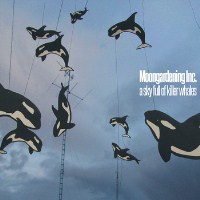 Moongardening Inc. might have an unusual band name as well as an album title, but their music manages to stand out and impress. Creating a solid fusion of pop, jazz, blues and a whole lot in between; A Sky Full of Killer Whales exudes a certain charm.

Only downside is that there’s hardly anything about the band online except what’s written on their BandCamp page and sparse reviews here and there.

Nevertheless, their music can easily take front and center without much background info about them.

Speaking of prog influences, the first cut, The Sky, is a short but chaotic mix of guitars, drums, and distortion. Although you’ll hear this trait in some of the songs, majority of the cuts are more folkish pop than anything else. Take for instance the third track, To Have or Have Not; the song is a laid back cut that features Sarah’s feminine vocals. With a jaunty tune, it’s easy to relax to and perfect for perking up your day.

One of my personal favorites from the album is Big G. It opens with heavy guitars which gorgeously complements the female vocals. Towards the middle part, the boys perform some melodic backup singing and it just brings back so much nostalgia of good old 70s rock. They cap off the entire record with a 10 minute opus titled, The Killer Whale. There’s a huge blank sound in the middle with only the first and last parts containing songs. They couldn’t have capped the record much better since the song evokes an ethereal feel.

A Sky Full of Killer Whales is one record to watch out for. The fact that the band doesn’t really stick to one genre makes it even more interesting. You get one enjoyable track after another; something that’s a bit rare to see these days. Go ahead and grab the download. It’s available at a pay-what-you-want option.