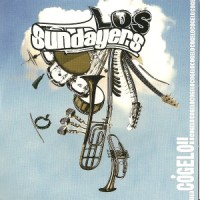 A spring roll of rock, jazz, funk, and ska with a Latin twist. Sundayers (because they were avid weekend trippers) is a jazz, fusion and ska Latin band that is not ashamed of enticing its listeners to dance like mad on the dancefloor even if they have two left feet.

CĂłgelo! is the band’s full album release and contains 11 explosive tracks that can convince almost anyone to dance. Their music is culled from a wide array of influences, with hints of reggae, rock, jazz, ska present and mixed with the unmistakable Latin beat. It’s the perfect soundtrack to a great weekend trip to the beach or a night beach side party with friends.

If there is one thing inherently distinguishable with this band, it’s that they are full of energy and this shows in each of their tracks. They have taken various influences from a wide array of genres, whether it be rock, Japanese music, Latin, ska, jazz or reggae.

Not only do the Sundayers create big sound, but they are also a big band. They contain a percussions department, a wind section, three singers and the necessary guitar and bass. Because of this, it’s not unusual to have a wild and frenetic energy circling their live performances. Essentially, the band has been likened to look like Â a non-stop party once they hit the stage and having that amount of energy circling around talented and passionate individuals.

CĂłgelo! or “Take It!” is filled with 13 wildly upbeat tracks, all written and sung in Spanish. However, despite the language difference, most of the tracks are easily likable and dance along to. The diversity in the music and vocals is pleasant and will keep any listener interested. It’s basically the perfect album to play while on some trip to a Caribbean destination.