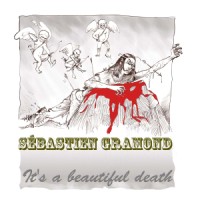 Beautiful 70s style pop psychedelic jazz rock that your parents can relate to. It’s A Beautiful Death is a compilation of 16 beautifully crafted tracks that echo the psychedelic 70s, and yes, it does somewhat trigger the same effect as how you would imagine it to be if you were on some illicit substance.

Sebastien Gramond is a French multi-instrumentalist that certainly takes things to a higher level. His music is fun, enjoyable and easy to listen to no matter what type of music you’re into.

Sebastian Gramond has been playing music since he was 6 years old. He started off playing violin and slowly expanded and taught himself how to play the piano and the guitar. Influenced by rock and progressive music as he was growing up, he went on to create his own brand of 70s style psychedelic pop jazz rock. He has released a ton of material, in fact there are over 70 albums available for download in Jamendo alone.

It’s A Beautiful Death contains 16 tracks ┬Āthat are all fun to listen to. My Lovely Dog is a personal favorite with its whimsical lyrics and unconventional guitar work. On the other hand, title track, It’s a Beautiful Death reminds me of Cream. It definitely captures the essence of the album with its spacey intro and chanty-electronic verses.

Despite the huge collection of music, Sebastien often neglected releasing the tracks and simply focused on creating more work. However, over the years that has changed with the help of his bandmates and friends. Majority of the work from Sebastien are available for download on Jamendo and most of them are enjoying great acclaim and popularity.

Founder, Sebastien Gramond, along with his bandmates are also able to perform on live shows thanks to the success that their records are meeting online.