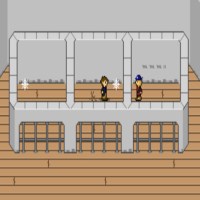 If you love buccaneers or pirates, then you’ll adore Dubloon. Created by Banov, the game is a huge point and click adventure. Don’t be misled by the point and click gameplay though, because this one actually plays like a true blue RPG. You’ll have items to collect and you can explore your world. Like any RPG, whenever you encounter an enemy you are transported into a different fighting scene accompanied with your stats and all.

The premise is a bit typical. You’re an ordinary person that happens upon a big treasure, so you go ahead and gather up a crew to make the treasure your own.

Released last June 14, 2010, the game has a cool gameplay and decent graphics to satisfy any hardcore RPG fan.

Like most RPGs, keep in mind that you will be in for a long journey. The game offers plenty of space for you to explore and enjoy. Of course, your journey to gathering your  pirate crew and trying to look for the treasure won’t be simple but that’s part of the fun.

One thing that’s different though is that game controls rely heavily on the mouse. You can pretty much point and click your way through everything. You can even go through the entire game without even touching the keyboard. However,  you can also use the WASD or arrow keys to move around.

Solving puzzles in Dubloon is easy.  You can use items from your inventory by easily opening the inventory and dragging your items to the ground or wherever you want it placed. Another nice feature for the game is that your characters easily level up. This curbs down boredom in trying to wait for your character to reach a particular level.

Graphics for the game are pretty decent. It’s not spectacular but it’s not horrible either. In fact, there were instances when I thought the treatment was quite suitable. As for the soundtrack, I’ve heard of several people complaining about it. It personally didn’t bother me as much but if you do find it annoying, you can always press M and turn if off.

Overall, the game is pretty simple. The storyline isn’t something to rave about but it does offer pretty good entertainment. Give it a go!