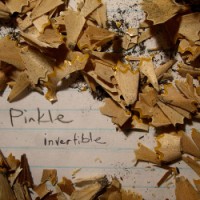 Invertible is the group’s current official release. It’s a compilation of DIY tracks collected for over 5 years. If you ever need an album to play to help kickstart that relaxing, no-work afternoon, then this should be on your list.

Compared to the type of music he plays now, Martin was actually a former member of rock band, Ophur.  The group was active in the band scene during the 1990s to early 2000s. They’ve shared the stage with some of the more prominent rock bands of the time including Veruca Salt, Sum 41, The Plan White T’s and the Violent Femmes. He moved to create his solo project as “Pinkle” after realizing that commercial path to success was not the way to go.

Invertible is the first full album for Martin and it seems he’s treading on the right path this time. It is filled with quirky, sweet, acoustic tracks with endearing lyrics. Although each track has its special personality, ” So Well” is a standout for me with its sensitive and cuddly vocals and the slightly upbeat melody. It’s a great opener that sets the mood for the rest of the album.

No doubt, Pinkle, is great at expressing his brooding thoughts and playfully manipulating words to showcase what’s on his mind. Another track that’s worth listening is “22 Years Older.” It’s hard not to think modenr-day Simon and Garfunkel on this one.