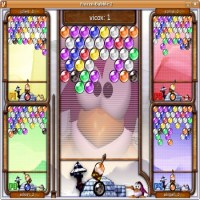 Looking for a simple shooter game that runs on your Linux? Then why not go for Frozen Bubble. It’s a colorful and simple bubble shooting game where you shoot colored bubbles. Successfully group together certain colored bubbles and they pop into oblivion. Keep messing up and pretty soon your screen fills up with bubbles and it’s game over.

The game was developed by Glenn Sanson and features a General Public License. Frozen Bubble is a no frills, simple, colorful and fun shooter game that you can play whenever you like. It’s actually one of the most popular game title under the Linux platform. The latest version developed boasts of a more responsive launcher, improved scoring system, and even an option to go for multiplayer mode online.

The game is pretty simple and yes, even your grandma and grandpa can probably play it. It contains a lot of levels, some are simple to figure out like for instance, one excellently placed shot can actually bring down the entire array of bubbles from the ceiling; allowing you to win. On the other hand, levels above 20 and beyond are a little more challenging, so don’t  think that the game will be utterly boring and redundant.

Overall, Frozen Bubble gives you enough reason why it’s considered one of the most popular game titles in Linux. It’s a great stress buster and works wonders for eliminating boredom.