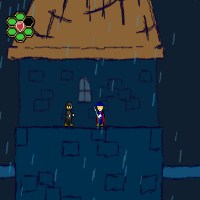 Assassin Blue is a cool action-platformer done by Banov. Like most games done by this cool developer, the game is quite interesting and fun to play. You get to control a little dude, named Blue, and traverse 12 levels, fighting and slashing enemies. Some of these enemies include dinosaurs in the sand, by the way. The entire game is done in 2D and features really tight gameplay and funny dialogue.

Like most of Banov’s games (Dubloon, Wolf or Crazy Over Goo), this one is extremely interesting and definitely worth your while. It has tons of awesome sword and boss fights as well as a good number of unlockable levels that you can enjoy. Go ahead and download the game for free right here or head on over to Banov’s website to get it.

In the game, you travel through four distinct areas while enemies pursue you. You’ll have to hack and slash your way from them. This one also includes a lot of jumping, running and climbing. Moreover, much of the game encourages exploration since there are several unlockable levels.

When fighting, you mainly use three buttons, X, C and Z. Pressing X is for when you are ready to attack, C allows you to disarm your opponents while Z lets you defend. You can also make use of various combos by just heading for the shop and buying them. The store also lets you purchase a music player if you’re feeling bored.

Speaking of music, the soundtrack for the game can be downloaded separately if you opt for the quality version rather than the MIDI one.

If you are fairly good at games like this, then you might not find any challenge in fighting off the lackeys. However, the big boss battles are something else. They more than make up for the lack of challenge or the simple ease of fighting off your other enemies. In the end, the game is quite polished. It’s a bit short but still worth every single moment of your time.