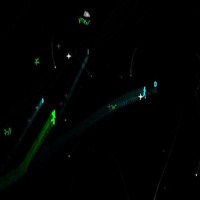 Chaser is a simple art game that has a straightforward gameplay. All you have to do is chase a blue figure man and keep him in the screen for as long as you can. The longer you can do this, the higher the score you’ll get. It’s really this basic.

The blue dude will constantly run away from you so you have to keep chasing him. You’ll start slow but eventually you’ll be able to increase your speed while collecting various things as you go along. Even though the game has a simple premise, it’s fairly addicting especially once you start off.

In order to chase the blue guy, you will be put in control of a little green dude, you can use the regular arrow keys or the WASD controls to make him move.  Simply press forward and maneuver by using the left and right keys. The background is made up of a completely black landscape with dots of green bushes here and there.  As long as you maintain the blue dude in your site for most of the time, you’ll gain speed and go faster and faster as you chase him. Eventually you will be able to catch him if you keep your focus.

Apart from a highly addictive yet simple gameplay, the soundtrack is awesome. It gives you a sense of rush and the pace quickens as you go faster or go beyond 1000 points. Be careful though, if you ever hit a rock or a tree during this stage, your green dude will careen off his path and you’ll have to gather momentum again.

After 20 minutes or so of running around, you might feel as if the entire game is pointless. Will you even catch the blue dude at all? There must be some meaning to all this chasing.

Well, no doubt those questions will assail you but as long as you keep in mind that it’s an “art game,” you won’t feel so bad if you don’t catch him. Without meaning to be a spoiler, there is an ending to the game. There’s actually a hidden ending as well. Overall, it’s a pretty cool game worth downloading.