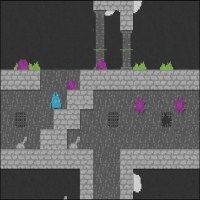 Kruunu is a nice little platformer that was released on January 18th. This is the first project for Finnish game developer, Jukio Kallio, after going into game development full time.

The game lets you play as a tiny blue character whose goal is to climb a tower and take the crown. Why are you aiming to climb this really high tower just to receive this crown? Apparently, elders in the land believe that whoever gets it will become the next ruler. Hence, your adventure and trials begin. Even though Kallio admits that the game was simply a part time project done in a span of months, it doesn’t look like it was rushed or done haphazardly. It’s actually a neat little platformer that almost anybody can enjoy.

Okay, so some parts of the game are pretty typical and basic. Take the storyline for instance, however, this actually works in favor for the game. The simple premise of having a character go through all lengths just to obtain a treasure and become a ruler is the perfect setup for all the cool obstacles and enemies that come your way.

In the game, you’ll need to climb, slide, and jump your way out of various obstacles as well as enemies lurking behind every corner. When you run, you can also head for the side of the screen and appear on the other side. It’s also packed with some unique puzzles that become increasingly challenging, the more you get closer to the tower.

The nice thing with the game is that it ensures you won’t be dilly-dallying around in every corner. To keep our little hero going, there’s an electrical beam that comes from below and fries your character if he doesn’t move fast enough. It’s definitely a nice little game pacer.

Overall, despite its simplicity, Kruunu is quite fun to play. You won’t be regretting spending your time with this ambitious little blue dude.