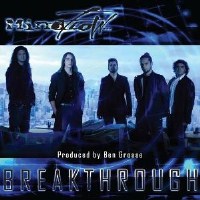 Formed in 2003, this progressive rock band from Sao Paulo, Brazil has garnered plenty of praises. Mindflow has won fans from both the rock genre to the hardcore progressive junkies.

Breakthrough from Mindflow is filled with progressive metal riffs, sweet and powerful vocals, thundering drums as well as flowing melodies that’s hard not to fall for.

One of the most promising and prominent progressive metal bands to come out of Brazil, Mindflow has proven that they can churn out melodic no-bull progressive rock.

Despite it’s sweet rhythm, the band leaves no doubt about their technical skill; featuring euphoric riffs and banging beats that’s sure to make everyone’s jaw drop.

The group was initially formed back in 2003 and has since garnered a great following in their home country. The first two album releases, “Just The Two of Us…Me and Them“ (2004) and “Mind Over Body“ (2006), catapulted the group into the ears of many progressive lovers. Their latest effort, Destructive Device features the three songs found in this download. Although you can get several other tracks from their first two compilations in their BandCamp website.

For this latest effort, Mindflow collaborated with top producer Ben Grosse, who has collaborated with the likes of Marilyn Manson, Breaking Benjamin and Slipknot. According to the group, the album is “packed with socially critical ideology.” Moreover, it “is a project boiling over with aggressive lyrics and themes.” Judging from the first three tracks offered for free, the band definitely has something to be proud of. In fact, any progressive metal rocker shouldn’t miss this album. It’s free anyway and from the looks of things, the entire album will be worth shedding a few bucks on.