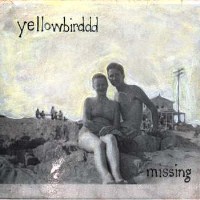 Liam McCormack is the man behind the ethereal indie folk outfit, Yellowbirddd. The moniker is a bit unusual but it does lend a nice touch to the sound that he creates.

Armed with an acoustic guitar, a slight reverb and some endearingly sweet sound; Missing serves as a record to get lost into after a bad breakup or maybe if you simply need a breather from all the loud music.

This is the third compilation from the Brooklyn, New York artist. His previous works include Random & Rare, Summer 2010 tour EP, and Hard Feelings which are all available as a free download over at his BandCamp page.

According to the artists’ bio, Missing is “an intimate snapshot into one person’s artistic catharsis from the feeling and act of missing. The listener witnesses him run the gamut of emotions from melancholy, nostalgia, and frustration, to optimism and self-delusion.”

The songs embody a certain sadness, sometimes remorse/reflection about relationships and partners. Starting with the track When You’re Away; the song is a quiet and gloomy single that shows off Liam’s expressive vocals. Accompanied with a guitar, it’s one of the best cuts included in the album and also makes for a great opening song.

Of course, Yellowbirddd isn’t all about mopey, quiet songs, he also has a couple of upbeat indie folk tracks up his sleeve. You can listen to Low Shoulder and If You’re Single, to catch a glimpse of the singer’s more uptempo and indie rocker side.

The album is a real treat for those who adore indie folk music. There’s a sincerity to Yellowbirddd that makes his songs instantly likable. You won’t have any trouble appreciating his lyrics as well as melodic sound the moment you take time out to listen. Go ahead and grab the download. It should be worth it.