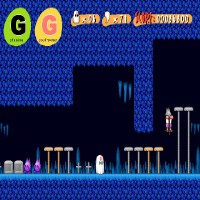 Enjoy over 50 levels as  you play the titular “Obake” or basically, a ghost. Fight and possess more than 20 different enemies and have an excellent time. Like playing Mario, it’s not hard to fall for the title character. The game is fun and has neat little quirks that make it interesting to play.

For instance, as an Obake, you have the option to possess enemies simply by jumping on top of an enemy and pressing the possess button. As you possess them, you gain a whole spectrum of new skills and abilities. Some of the cool abilities you can gain include walking on ceilings, climbing over walls or even being invincible for a short period. Of course, there’s another use for these abilities. There are certain points in the game where you would need a particular ability in order to move forward. This instigates a little creative thinking in your part; figuring out which particular enemy ability to use at a particular time. There are over 20 types of enemies you can choose from.

Obake is also a great game in terms of the vastness of the game world. You can go through over 50 levels and the graphics are pretty solid. Although the game isn’t particularly difficult and a bit short, it is worth playing especially if you adore platformer games every once in awhile.