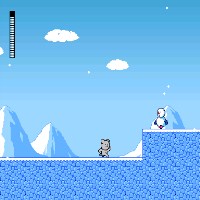 Nezumiman is a parody/tribute to the NES game, Mega Man. This cool 2d shooter platformer lets you play as a rat that can do almost anything Megaman can do (including the infamous sliding maneuver that became prominent since Mega Man 3.)

The game is quite simple to play unlike Mega Man, but it is fun. Your goal is to defeat the evil, Dr. Gyoniku and a his gang of evil rat-like creatures. There are 8 levels in total and you have to beat every single boss in the level to advance.

Almost every single aspect is similar to the blue robot series, the only marked difference is the graphics and instead of fighting big bad weird robots, you just fight off weird animals. Pretty cool game that’s worth your time. Nezumiman (rat-man) features very sweet, candy-like graphics that’s easy on the eyes. The background is pretty colorful and the sound suits the game well.

As mentioned, instead of a blue robot with powerful weapons, you fight off as a rat that has almost all of Megaman’s abilities; running, sliding, jumping, shooting stuff snowballs (?) from his arm, you name it. On your way, you have to collect cheese and energy balls to help boost your energy. Also, for every time you beat a boss, you gain a cool new ability.

To make it more interesting, there are hidden chapters that you can unlock once you’ve finished the entire game. It’s not tough to beat the game, in fact, you can probably finish the entire thing in an hour of two depending on your skills. There’s a save feature as well if you don’t feel like playing in one go.

Nezumiman is only available for Windows as of the moment. Nevertheless, it’s a pretty fun and engaging game. It adds all the right elements in one super cute game.