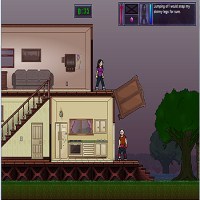 Haven’t gotten over zombies yet? Here’s another one you might want to take a chunk off.

Survivor – The Living Dead is nothing new in terms of concept. You play a 20 year old girl by the name of Amber Chaplin who witnesses her brother’s violent death in the hands of a zombie. To save herself, she flees and comes upon a large house that seems to be infested with the walking dead. Will she survive or will she turn into the next best grub for these zombies?

Survivor definitely takes almost all the elements of a good zombie game and meshes them into one big and highly entertaining game. You get big guns, a heroine that’s not immune to zombies and actually gets tired when sprinting too much and simply an awesome gameplay.

The game incorporates 16-bit retro graphics, an awesome soundtrack and a highly engaging gameplay. Sure, there’s just one level (the house) but there are so many unlockables to keep you busy. By the way, did I mention that the game is quite tough to beat? Don’t think that you’ll simply blast your way through hordes of zombies to survive. This one actually requires plenty of wit and brains to solve some of the most intense puzzlers out there.

In fact, apart from zombie blasting, you’ll need to solve a lot of puzzles in order to beat the game. Your main goal is to survive until the morning comes but this means watching out for several things which include bites, limited ammo, your health bar and looking for the right places to explore.

The cool thing is that even though you do get the traditional guns, you would need to be ingenuous and will find yourself barricading doors or throwing appliances as well as furniture just to keep the zombies away. There’s simply no room for boredom with this game.

Survivor offers 4 modes of gameplay but you need to complete the first one in order to access the other three. It also offers a reward system and tons of options to make your character stronger and more capable of beating hordes of undead. Meanwhile, controls are simple. Use WASD to maneuver Amber around the house. You can define the Action button which allows your character to lock doors, pick up items etc.

If you’re looking for a great quality, brain numbing puzzle adventure zombie game, then Survivor- The Living Dead is perfect. It nicely incorporates everything you would come to expect from the genre; even adding more to it. A highly addictive game worth checking out.