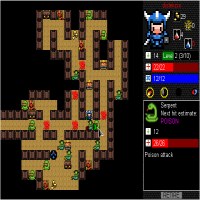 Desktop Dungeons is a cool puzzle, RPG game that will definitely keep you coming back for more. The game features simple and basic gameplay that can last for about 10-15 minutes at a time. However, there are rogue-like elements and surprises that help keep players keep coming back for more.

This awesome dungeon crawler lets you to explore different dungeons. Each level is randomly generated so it keeps everything quite interesting. The gameplay is simple but don’t be fooled, it’s a tough game to master. Surprisingly, it’s this juxtaposition of basic and complex that makes the game addictive and engaging. It’s even garnered a fanbase and various forums have sprouted in discussing the various parts of the game like exchanging spells, tactics etc.

Okay, so even though it is mighty fun and addictive, the game isn’t perfect. The graphics aren’t worth swooning over but it’s definitely decent. The characters are blocky and at some point, you might have trouble distinguishing a character from a piece of colored blob. Nevertheless, the gameplay and storyline more than make up for the unimpressive graphics.

When it comes to playing the game, there are two main goals to pursue when playing Desktop Dungeons. First, you have to raise your points or score and make it as high as possible. There are plenty of ways that you can do this, like for instance fighting off and killing enemies. The second goal of the game is to kill off the big bosses. Now, this one isn’t so simple. Most of the bosses in the game are difficult to beat especially if their levels are high. In fact, the game somewhat prepares you for these battles since you would need to get to a certain level first, gain experience, items etc., before you are given a chance to face off a boss.

In the end, since you have to figure out the order of monsters to fight off before actually getting to the boss. Plus, you’ll have to figure out and explore much of the area that you are given in order to do this. This provides the game with a puzzle element instead of just straight out role-playing.

Desktop Dungeons creatively incorporates these two points and create a game that is truly fun and enjoyable, not to mention challenging.