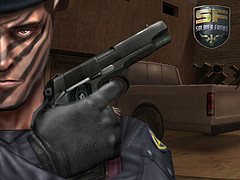 Soldier Front is a 3D first person shooter game with very realistic game play and graphics. A unique feature among FPS free games is character growth, where the player can save their statistics and rise throught the military ranks just as a real soldier. The game also allows you to choose which task force you want to belong to (SAS, SEAL, UDT or Delta Force). Each setting comes with different weapons, statistics of recoil and rate of fire.

The various weapons throughout the game were created with more than ten different aspects in mind including operation type, amount and rate of recoil, rate of fire, and even the minimal movements of the view caused by the draw back. The game provides you with a dynamic and realistic experience as if you were actually on the battle field.