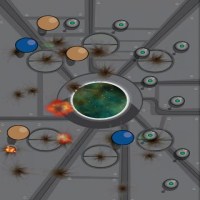 Winning in Cestos means you have to be the last man (or marble) standing. The game is an action multi-player that might seem simple but is actually more complicated than it lets on. It’s considered as one of the first multi-player Android games out there and has won tons of fans ever since its release.

The game works on iPhone and pretty much any Android platform. It’s easy to like and works great if you want to socialize and play with friends. The game supports 1versus1 or sometimes up to 4 players, depending on the map/level. The best part about this game though is that it’s offered completely free. What are you waiting for? Give it a try and see if you have what it takes to be the last man standing?

In Cestos, the main goal is to be the only remaining marble on the screen. You, as well as other players will be controlling your very own marbles. The main goal is for you to push your opponent down into the black hole. The player that remains and doesn’t fall off inside the hole wins the game.

Sure, it has a simple premise but don’t underestimate the amount of fun this game generates. Trying to beat other players in the game is quite challenging since you’ll be playing against other players and real people instead of a simple computer.

Best of all, you’ll get this game absolutely free. So if you’re feeling a little down and you need something to pass the time, maybe something that’ll make you feel better knowing that there’s another person interacting with you instead of just a mindless computer; then this is the game to try out.