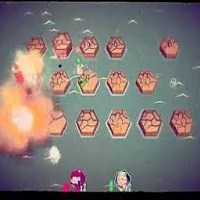 General Conflict is the result of a project created by 8 talented students from Utrecht School of the Arts. The game is a simple yet enjoyable fast-paced shooter platform that is perfect if you have several buddies over (currently it can accommodate up to 3 players) and are clearly looking for some fun as well.

This great little action platformer is still being upgraded by the team as they get a feel for the response and feedback they receive from gamers. However, that doesn’t stop it from being such a fun game to try out though.

In General Conflict, you get to control one of four prominent characters. It’s a game of survival where you try and blast away the other players and their islands. The last man standing on a platform wins the game. Currently, the game features about 12 levels of gameplay. The team is still hoping to add more levels depending on the response from the community. They also want to incorporate an online multiplayer aspect to the game. As of the moment, you’ll need to gather up a three of your friends to play on your computer instead of being able to do it remotely.

According to the group’s site, it is a “game of anticipation, chaos and survival as players try to stay one step ahead of their opponents to claim victory. The game was designed to combine the simplicity of Bomberman with the chaos of games like Super Smash Bros.”

Overall, the game is fun and easy to learn. Controls and gameplay are very responsive. It’s a game that’s highly playable and ensures plenty of good times.