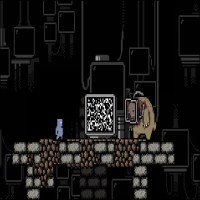 SuteF is a complicated and challenging puzzle platformer that will truly delight your senses. It’s a cool game where you will need to shove around boxes, avoid laser beams, scale walls and activate switches.  Your main goal for doing this would be escape from the “Abyss.”

This game is actually an updated version of an eerie, but interesting game called Fetus. Of course, suteF is more advanced and fleshed out. It contains new mechanics that will intrigue and challenge both old and new gamers alike.

Each puzzle is creatively done, plus the entire game resonates with a semi dark atmosphere without going overboard. This one easily takes the cake as among the best puzzle games of 2010.

Basically, the game lets you control a blue character that’s trying to get away from a nightmarish land that’s known as the Abyss. Your main goal is to lead your character towards the exit out of every room. However, you will need to figure out very interesting, not to mention, brain-twisting puzzles. You’ll also encounter countless weird creatures.

Created in 8-bit, the game combines simple graphics with a really fun gameplay. The variety in controls also makes the game even more appealing. On the one hand, you have your typical one button push controls. For instance, you press the Z key to perform a jump and press X to activate your grappling hook. You’ll need the hook to drag boxes in place to prevent laser beams from hitting you. Even though this might sound a bit boring, it’s a different feel once you start playing the game.

The best part is that the game is available for free download. Game time is roughly two hours so you can easily play this on your break or if you have some spare time during your day.