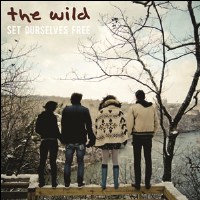 The Wild: The Wild EP

This is the second time this group of Atlanta young’ins who call themselves, The Wild, have made an appearance here in Frostclick. We’ve reviewed their other album, Set Yourselves Free as well.

Before that album came out though, the group released this 5-track self-titled EP. Their bright and sunshiny folk country sound still resonates though. The album is still a bit raw compared to their succeeding release yet is imbued with a fun, happy-go-lucky vibe that makes you think of frolicking around the countryside with friends.

The album is released and available for free download on Quote Unquote Records. Take a listen and download this entertaining record.

Hailing from Atlanta, GA; the Wild is made up of Dianna – vocals, tambourine; Kylewilliam – drums; Witt – vocals, guitar, harmonica;  Steve – banjo, vocals and Dakota – bass. The group still maintains a highly energetic sound that’s perfect for a long fun drive or a happy afternoon hanging out with friends.

The record opens with the upbeat country pop track, They Too Will Know. Opening with a honky tonk country sound with harmonica’s and upbeat drumming; the song easily makes you want to do some square dancing even if you aren’t really a fan. The vocal work is pretty good and overall, the vibe is just pretty happy.

On the other hand, Oh, Alex, is a more mellow song that serves as an ode to a summer love. The song radiates with emotion yet it still exudes the band’s punkish feel. Although the vocals can sometimes waver, this adds a sense of reality to the lyrics and the song. We Shall Overcome is a lovely song about friendship and being young.

If you liked the band’s debut record, then you might want to check out this. It’s perfect for a relaxing day, whether in the countryside or your very own bedroom. Definitely a fun album to listen to.