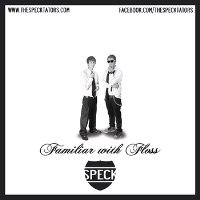 The Specktators: Familiar With Floss

The Specktators is a two piece crew made up of Matt Duda (known as Moe-T) and Patrick Duda (known as Packi). Creating a sound that’s mainly a blend of hiphop with a hint of electronica, R&B, pop and even dance; the brothers make a good impression with this compilation.

These two share a passion for their craft and have recorded/produced their own tracks since they started back in 2009.

They’ve released various projects before including the Never-Ending Mixtape where they constantly added recorded tracks every month. Most of the songs there are now part of this new compilation.

Familiar with Floss was released last October 2011 and comes with 16 tracks mostly taken from their previous releases. Now, I’m not going to lie and say that I don’t have reservations when listening to two white guys creating hip hop music. However, when you listen to some of the songs on this record, you’ll quickly forget much of the stereotypes.

Tracks like Super Floss feat. DJ Kojo, Opinions, Fast Forward and Whippin’ resound in good laid-back beats and some fine rhymes. Although there are a few tracks worth skipping, a good portion of the album is perfect for playing if you want something cool as a soundtrack to your day.

Moreover, the boys definitely have some serious skills up their sleeves. From the mixes and the rhymes, the songs are done perfectly while infusing their personalities along the way. During live performances, the group has been touted as having great energy plus they never do the same set twice; something that fans can look forward to.

You can grab the download over at their BandCamp Page. The album is offered for free. This is worth checking out if you ask me.