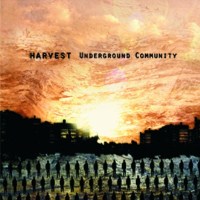 Indie alternative group that mashes girly vocals with prog-like instrumentals. Harvest’s music might seem like girly indie alternative pop at first listen, but if you pay closer attention, you’ll hear that there are hints of prog rock here and there.

Underground Community is the latest album from Barcelona based band, Harvest. The album features 13 cleanly done and pretty likable tracks. With pretty vocals and a progressive sound, it’s definitely  an album worth looking into and trying out.

Like most bands, the group was brought together back in 2008 because of their equal love and passion for music. Members of Harvest include, Monique van der Kolk on vocals; Jordi Amela on keyboards; Jordi Prats on guitar. After several months, the group added Roger Vilageliu on bass and Alex Ojea on drums to complete their lineup.

Although the sweet female vocals of Monique might be enthralling, the group’s progressive rock sound is still very evident in most of the instrumental work on the background. Tracks like “Underground Community” are great representatives when it comes to showcasing the band’s proggy sound. The haunting progressive feel of the intro as well as the poppy piano work and atmospheric keys work great to represent the band’s core. However, if you are looking for the band’s straight out prog performance, then you can’t go wrong in “No Return.” Even the vocal work sounds like it belongs to a Pink Floyd track.

The album might not be the next The Dark Side of the Moon, but it certainly delivers its own brand of progressive alternative pop; something that is rarely seen in the music scene these days.