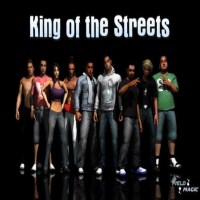 King of The Streets

(Warning: Game Contains Violence and Explicit Vocabulary)
King of the Streets might seem like your typical versus fighting game, and indeed it is; but what’s special about this one is that it’s simply such good fun to play.

Those who spent a good portion of their time playing Street Fighter, Mortal Kombat or even Tekken will understand the satisfaction of beating an opponent to a pulp while showing off some serious fighting skills.

The game was initially a downtime project for Field Magic and then it just evolved into a full pledged game. King of the Streets engages you in a streetside brawl in a reign for supremacy.

In King of the Streets, you get to choose between 8 characters. You can either play them in story mode or have them duke it out in versus mode. Each character has his or her own special set of skills. You can do combos and single attacks. Characters can also block against their opponents attacks or even grapple them using a special button. Like in Tekken, you can access this move list anytime during the game simply by pressing F1.

There are also finishing moves incorporated in the characters skills so you get that signature killer move towards the end. Other cool features you can expect include a hidden boss battle and multi-level stages. The entire game was done in Maya and animated in 3ds Max.

Of course, the game isn’t exactly your next Mortal Kombat but it’s a very cool game to try out. For an indie game, it manages to capture the fun, excitement and a little bit of the nostalgia that comes in playing versus games.