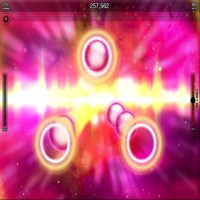 Tap Tap Radiation is a free iPad game that will get you tapping on your free time. The game is much like Dance Revolution only this time, you let your fingers do the tapping.

Developed by Tapulous, it is a fun and addictive game that’s made even better for its iPad release. There are more than 30 free tunes that you can play in the game but thanks to its addictive quality, it won’t be long until you find yourself going for the paid songs as well. It’s hours worth of colorful, almost psychedelic, graphics and fun songs to tap your otherwise boring afternoon into.

If you have played Tap Tap games before, you would know by now that the most important thing in playing this is timing. You have to be very accurate when tapping along with the beat and into the screen.

The game rules are simple, just tap the orbs that show up on the screen in sync with the beat. When you tap incorrectly and at the wrong time, the orbs will start glowing red. Just glance up to check out if you want to see your streak meter or how well you are doing. Meanwhile, the right of the screen gives you an indicator whether you are tapping on time or if you are tapping too late.

Everytime you finish a song, you are given a sort of recap about how good or how bad you’ve played the game. This includes summaries of your tap streak and misses. This also shows the amount of points you’ve gathered, according to your tapping skills.

Thanks to the bigger iPad screen, it’s much easier to play this game with this device. It’s also twice as fun because of the free tracks from Mos Def, Serge Devant, Richard Vission and so many more. Go ahead and grab this cool game right now.

The Android version is coming soon!