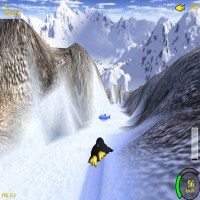 If you ever had a fancy for, Tux, the Linux mascot, then how about using him in a game? Tux Racer will let you do just that. It’s a free 3D game that will let you use Tux or any of the other characters and guide him down from a hill, collecting herring on the way. You can make him go faster by sliding in ice. If you prefer maneuverability over speed, then let him slide on snow instead.

Originally developed by Jasmin Patry, Tux Racer is a fun, relaxing game that’s perfect for a great day off. It’s not too complicated and quite easy to enjoy. Controls for the game are pretty basic. Use the left and right arrow keys to direct Tux properly. However, take note that the “Up” key will cause the little penguin to paddle. Paddling through a race can help to increase your race time but it can also slow you down. Hence, this should be used at the right instance. You can let Tux jump depending on the terrain, or you can also hold down the “energy key” and then letting it go. There are also versions that would let you use the Wii remote along with the game.

In order to advance to the next level, you have to be able to get enough herring as well as reach the end of the course before the time limit.

Although the game might seem as if it’s meant for children, adults can definitely have fun playing the game as well. Just make sure to expect cartoony graphics as well as sound. If you don’t mind this though, then go ahead and download the game. Besides, who can resist this cute little Linux mascot? The game runs on several platforms including Mac and Windows.