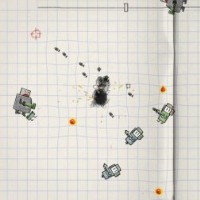 Choke on My Groundhog, You Bastard Robots

Looking at Choke on My Groundhog, You Bastard Robots (COMGYBR for short), it’s hard not to see that it’s a relatively simple yet entertaining game. Inspired by Robotron, you are tasked to fend yourself and world from robots that have taken over the world.

There are no mush storylines involved in the game. The main point is for you to fight off the approaching robots from all four corners of the page and simply to survive. It’s definitely a fun and straightforward game perfect for letting some steam out.

In COMGYBR  (see, so much easier) you play the last of your kind. Robots are taking over the entire world and you’re the only one left. It’s up to you to save the Earth and basically fight off the invasion. For help, you have a time travelling groundhog sidekick that will help you kick the robot’s butt back into oblivion.

Use WASD or  ARROW KEYS for controls. The LEFT MOUSE BUTTON can be used to aim and shoot and you can use SPACE to time travel in case you suffer a lethal hit from one of the droids. Hence, when you time travel, you end up helping yourself fight off the robots. Die 6 times in a row and you get 6 versions of yourself fighting at the same time.

The concept is pretty cool if you ask me. Plus, the simple paper grid style background allows for a more focused gameplay. As of the moment, there are only four levels to the game; making it a short but perfect break time game. Hopefully, they’ll update this and add more levels. It’s a pretty addicting and fun game that both robot lovers and haters will enjoy.