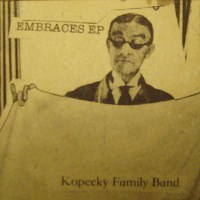 A “family” since 2007, the Kopecky Family Band is a beautiful gathering of 5 boys and 1 girl who sing melodic indie pop rock that will certainly put you in a good and relaxing mood.

The band hails from Nashville, TN and evolved after plenty of late nights sharing and talking about dreams. Since their formation, the group has performed for several big ticket events such as CMJ, SXSW and Bonnaroo.

This is the first out of three EPs the six-piece have released so far. This one is a couple of years old but it retains that same quiet beauty that most listeners will surely fall for.

Embraces was released back in 2008 and comes with 5 songs that resonate with an indie rock, pop vibe. Some of the tracks are slightly upbeat while most of the others are mellow with a slight hint of country & jazz.

Among the slower songs is opening track, Gun, which is a charming single that combines both female and male vocals along with a jazzy pop sound. The track serves as a nice introduction to the band’s sound. This is perhaps one of the easiest cuts to love in the record and definitely deserves its spot as EP opener. The group doesn’t just excel in their melodic cuts though, their more upbeat singles like It and Trainwreck, also feature a catchy beat.

The Kopecky Family have a knack for combining both sweet stringed instruments with an edgier rock style. The violins and harp add a classical sound underneath the louder drums and guitars. Plus, the vocal combination goes beautifully with each track. It’s seldom to find a band that successfully creates a balance without sacrificing or muddling the final results. This Nashville crew definitely got it down to pat.

Embraces EP is one of those mini compilations you shouldn’t miss out on. It might be short but it’s filled with songs that are brimming with great talent, energy and a heartfelt sincerity. Grab the download from their BandCamp. This one is offered absolutely free.