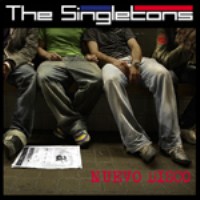 No nonsense garage rock with a surfer’s flair. When hearing The Singletons for the first time, you would automatically think it was an updated version of the Kinks. A mix of surfer music, brit pop rock garage combined with slightly offbeat enunciation. However, The Singletons are in fact from Barcelona and released their brand of music only about 2-3 years ago.

Although this type of music has been played and re-played by various other bands, there’s no doubt that it sill holds its appeal under the hands of this band. Check out their 11 tracks and judge for yourself.

Made up of four excessively creative guys who had to figure out where to divert all their excess energy, the four members formed The Singletons. To make it more interesting, the band hung on to several concepts in forming their band. Influenced by the British mod scene, the band definitely reflects that in each of their tracks. The jangly guitars are ever present as well as the 70s flair.

This album is made up of 11 upbeat tracks that are sure to get you head bobbing and questioning whether you time warped back into the 70s. It opens up with Once Upon a Time, which gives that surfer vibe throughout. It deserves to be played while you’re at the beach contemplating how long you should wait for the swell before running after it.

Another track Music Market is a feel good song that starts with a typical guitar intro and progresses into semi-shouty vocals. There were even slight hints of jazz and blues, although very faint.

This might not be the best rock album you’ll ever listen and it might not even change your life, but it’s definitely something worth your time.