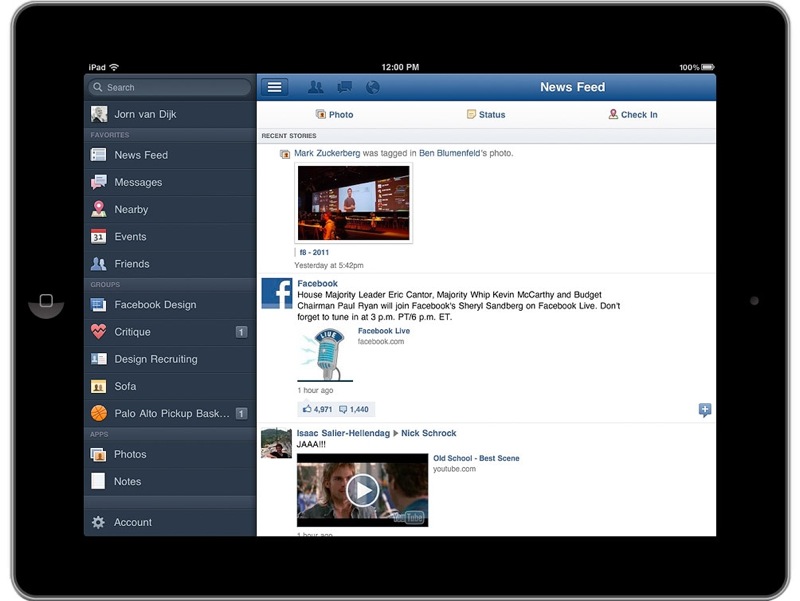 After the very successful launch of the iPad & iPad 2, users continually waited for the official Facebook App for the tablet but the wait seemed to be in vain. So almost 7 months after the iPad 2 was released, the Facebook app for iPad has made its homecoming with version 4.0.2.

Users around the globe were frustrated by using the Facebook for iPhone app on their iPad as it appeared to be pixelated in 2x mode and the window mode just did not do justice to the high-resolution 9.7-inch display of the device.

First lets talk about why the delay of an App took place. It is reported by the developer that the Facebook for iPad app was ready-to-be-served long back, but Facebook kept it on hold for more than 5 months due to a reported tiff with Apple over the Ping network, and also about certain terms and condition that Apple could not agree to.

So what is really in store with the official Facebook app for iPad? Well, you get full-screen, hi-res photos giving a total feel of a photo album; photos appear sharper, clearer and are viewed better on a 9.7-inch display. Now there is added functionality to play games within the app itself, so Zynga Poker, Mafia Wars, Cityville, Farmville, Sims Social are all a part of the iPad.

The app is split into two parts, the left column sporting quick access to features such as News Feed, Messages, Friends, Nearby, Apps, Customized friend-lists and the likes, and the right hand pane with anything you might be presently viewing. However, the functionality that receives the biggest ‘thumbs up’ for me is when the app runs in both, landscape and portrait mode.

The app itself is very streamlined and resembles the desktop version of Facebook. It adopts a very non-cluttered approach and adds a bit of extra security.
So what is there to do? All iPad 1st gen and 2nd gen users head to the app store and update! Remained cautious thou, as many users have faced some issues with the app, little glitches which hopefully will be ironed out with the new release.