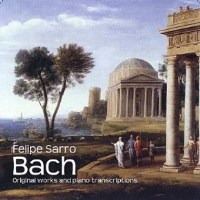 If classical is more your thing, you might want to grab this little gem from Felipe Sarro. The Brazilian pianist takes on the music of one of the most influential and well-known classical composers ever, Johann Sebastian Bach.

Every single piece was recorded and played by Sarro on piano; recreating, reliving and celebrating the sound of the revered German composer.

Sarro has been interested in music since he first started playing the electronic keyboard at age 2. He quickly moved on to the piano and later on studied music formally at Academia Musical Fátima and Santa Cecília Musical Conservatory. Currently, he’s continuing his studies under another Brazilian pianist, Amilcar Zani.

Bach, on the other hand, was a Baroque composer who had an extensive number of compositions. He created more than 1000 pieces and there’s even a classifying system created in order to catalog his works. Known as the Bach Works Catalogue (BWC,) the naming is done with the prefix BWV then followed by his work’s number.

Sarros’ renditions feature some of Bach’s most popular and well-known works including a portion of “The French Suites.” Any classical music lover would definitely appreciate this lovely compilation. Sarro does justice to Bach’s compositions and also beautifully translates Siloti’s transcriptions. Take a listen. It’s perfect for cleansing your musical palette and rejuvenating your interest for classical music.

This work is licensed under a Creative Commons Attribution-NonCommercial-NoDerivs 2.0 Generic License.